A Community-Powered Catalog of Historic Properties from Preservation Idaho 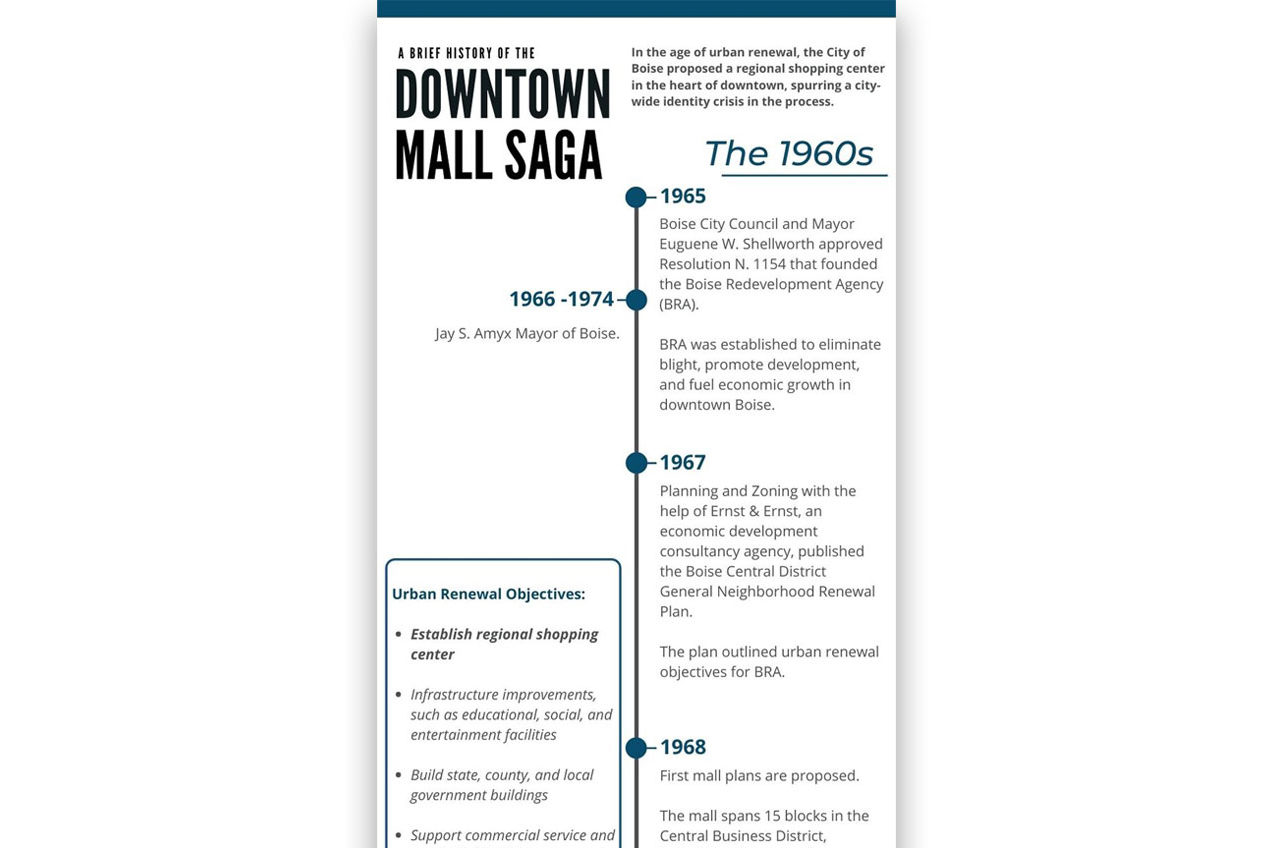 Preservation Idaho Intern Savannah Willits explored the controversy surrounding Boise’s failed downtown mall, and it’s role in the larger story of Boise’s urban renewal and identity. The following is the first of a two part series of blogs resulting from Savannah’s research.

The Impact of Buildings Unseen

It is often the case that the shelters envisioned and destroyed can tell a more compelling story about our ever-changing fears, desires, and values, than the buildings that remain present. This could not be more true than in downtown Boise which has been radically reimagined and rebuilt several times over, mirroring the tumultuous ongoing conversation about Boise’s identity and future. The buildings not present, whether unrealized or destroyed, continue to have a lasting presence on the space & layout, economic development, and identity of the city today. They remain the buildings unseen.

A pivotal moment in Boise’s modern urban and identity development occurred during the urban renewal phase which bulldozed through the nation’s major metropolitan centers during the 1950s and 60s. In a true Boise fashion, in which national trends hit the city after a period of 10 to 20 years of delay, the first shudders of urban renewal were not felt until the late 1960s and faded away by the mid-1980s.

Act I: The Plan

The Self Guided Tour of the Mall Saga and Boise’s urban development can be explored in three parts:

Since the age of urban renewal, mixed-use development principles have guided the urban planning decisions in Downtown Boise. However, the unseen building’s presence, the regional shopping mall never built, lingers over the city.

The absent downtown mall has resulted in a downtown that is not now dependent on a dying retail model nor in desperate need of major revitalization. From the rise of abandoned mall photography to the dramatic decline of major retailers, the mall’s unfilled promise of prosperity has been well documented. For example, JCPenney, Macy’s, Forever 21, and Victoria’s Secret, all anchor stores at Boise’s TowneSquare Mall, have filed for or are on the brink of bankruptcy.

Similarly, Boise Dev and the New York Times has reported that Green Street Advisors, a firm that rates malls in the United States, forecasted that “half of all department stores” would close in the next five years, even before the COVID-19 pandemic hit. This pandemic has only exacerbated the already weakened economic livelihood and exploited the archaic reach of major brick-and-mortar retailers due to the rise of the online retailers.

In an alternative timeline in which the downtown mall is built, Boise’s retail situation would have most likely resembled Salt Lake’s City Creek or Spokane’s River Park Square. Both regional shopping centers have required redevelopment efforts in the form of economic revitalization funding and amenity additions and will continue to require rehabilitation to remain relevant.

Similarly, if the regional shopping mall had been built downtown, it would have experienced a higher density of retailer casualties. As of right now, only three retailers (Walla Walla Clothing Co, Loft, and Maven) have announced they will not reopen, while at least five mall stores, many of them anchor institutions, are desperately grappling with bankruptcy on top of an already dying mall model.

There are incredibly high odds that this “alternate universe Boise” would be facing immensely worse economic costs and a bleak future at this exact moment in time. Instead of celebrating a long list of national accolades, the center of downtown Boise would be in desperate need of radical revitalization. Therefore, the existing sustainability of Boise’s mixed-use scene owes its dues to the failed mall.

Overall, the major lingering impact of the absent mall was that it successfully persuaded the Boise community and leadership to bypass a failed method of redevelopment and instead pursue a mixed-use development approach. Rather than being passive or apathetic observers of Boise’s evolving identity, community members such as those who participated in the Preservation Coalition, citizen advisory committees, and the planning entities actively took part in creating a Boise that values economic sustainability, historic preservation, and progressive urban planning practices. Boise’s mixed-use redevelopment plan, cemented during the urban renewal phase, successfully avoided the adverse outcomes of the regional shopping malls that haunt many of America’s metropolitan areas today.

The impact of the historic buildings seen, that were once jeopardized by the mall proposal, have continued to be architectural anchors downtown. These buildings not only provide architectural flavor and diversity in style, but also embody Boise’s historical duration. Had these buildings been demolished, architecturally, Boise would appear more adolescent in age and sophistication, compared to other peer northwest cities. Similarly, Boise’s layout and image would have been dominated by architecture of the 1970s and beyond, as well as barren surface parking lots in order to serve the large regional shopping mall. Incidentally, by remaining seen, these buildings provide depth and maturity as established urban anchors.

Moving forward, Boise’s ever-changing fears, desires, and values will continue to evolve and will likely become more divisive. As new buildings are envisioned, the skyline rises, and Boise grows in both age and size, conversations about embedding the community’s long-term values into present day growth are vital. Such as in the case of the proposed downtown mall, these conversations and resulting outcomes will likely be the difference between a long-lasting mistake and future prosperity.

Overall, the legacy of the buildings seen and unseen have a tangible impact on the economic, social, and spatial outcomes. Therefore, it is critical to understand the balance between the reimagined visions and the dust of demolition. Equally important is to understand the community’s legacy of protection, conservation, adaptation, and rebuilding. Boise’s self-proclaimed mission of livability depends on this delicate balance, especially as our community grows.