A Community-Powered Catalog of Historic Properties from Preservation Idaho

Joni Mitchell once sang “They paved paradise, and put up a parking lot.” With that song stuck in my head, I accompanied more than twenty other interested Boise citizens on Preservation Idaho’s first Arch Walk of the 2011 summer season around what is the quickly disappearing Central Addition of Boise’s downtown. This “addition” to the early Boise plat map located between current Front and Myrtle streets and fourth and sixth streets, is being threatened by development and misuse. A little over a year ago, BAP students were inspired by the National Trust’s 11 Most Endangered Sites list to create Boise’s own list which included the Central Addition. See our previous blog for a repost of this blog. Ok, but really. Apart from the sentimentality for old buildings, why should Boiseans care about the Central Addition? You know the area, by Winco, uncomfortably squeezed by surface office buildings, inhabited by a lower socio-economic status probably not so interested in the intricate Victorian spindle work on the sagging front porch of their rental.

It doesn’t seem to have a future. It doesn’t appear to be part of the “master plan.” What is the alternative to the tide? Dan Everhart, a PI Board member, made it clear what vision could workwhen he stood on fourth street at the end of our tour and talked eloquently about a future that included a reference to the past, to Boise’s history. This vision would include tree lined neighborhoods with deliberately and beautifully built homes that reflected Boiseans’ dreams and aspirations. The homes could serve non-profits, offices, anyone willing to apply fresh paint and some care in order to have a space to operate. Furthermore, this vision should include Boise’s only Second Empire style homewith incredibly ornate wood work and two of Boise’s only Shotgun style homes. Isn’t protecting the last of something worthwhile?

Back to Joni Mitchell. The threat is real. The immediate plan is to demolish the 1894 Victorian home of the Fowler family in September if it is not moved by then. This home features a nicely intricate exterior and fantastic wooden trim on the interior that echoes the sun burst designs found in the roof line gables. I would think the trim and the colored glass windows themselves would be of interest to someone. If the house remains in September, it will be demolished, with materials hauled to the landfill and the memories of the home left in Dan Everhart’s files. The plan is to replace it with a parking lot supposedly needed to relieve the parking crunch in the area. As we ended the tour, Dan pointed out that two parking lots already in the area were at most only two thirds full of cars. That’s what we get for paving Boise’s history?

Update…much of the Central Addition has now been demolished and is currently being replaced with office buildings. 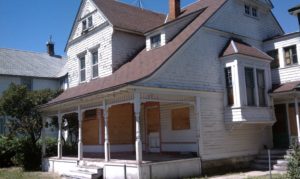 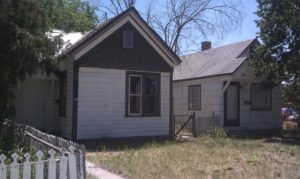 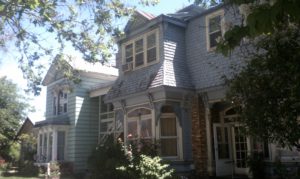 Recent posts
From the gallery